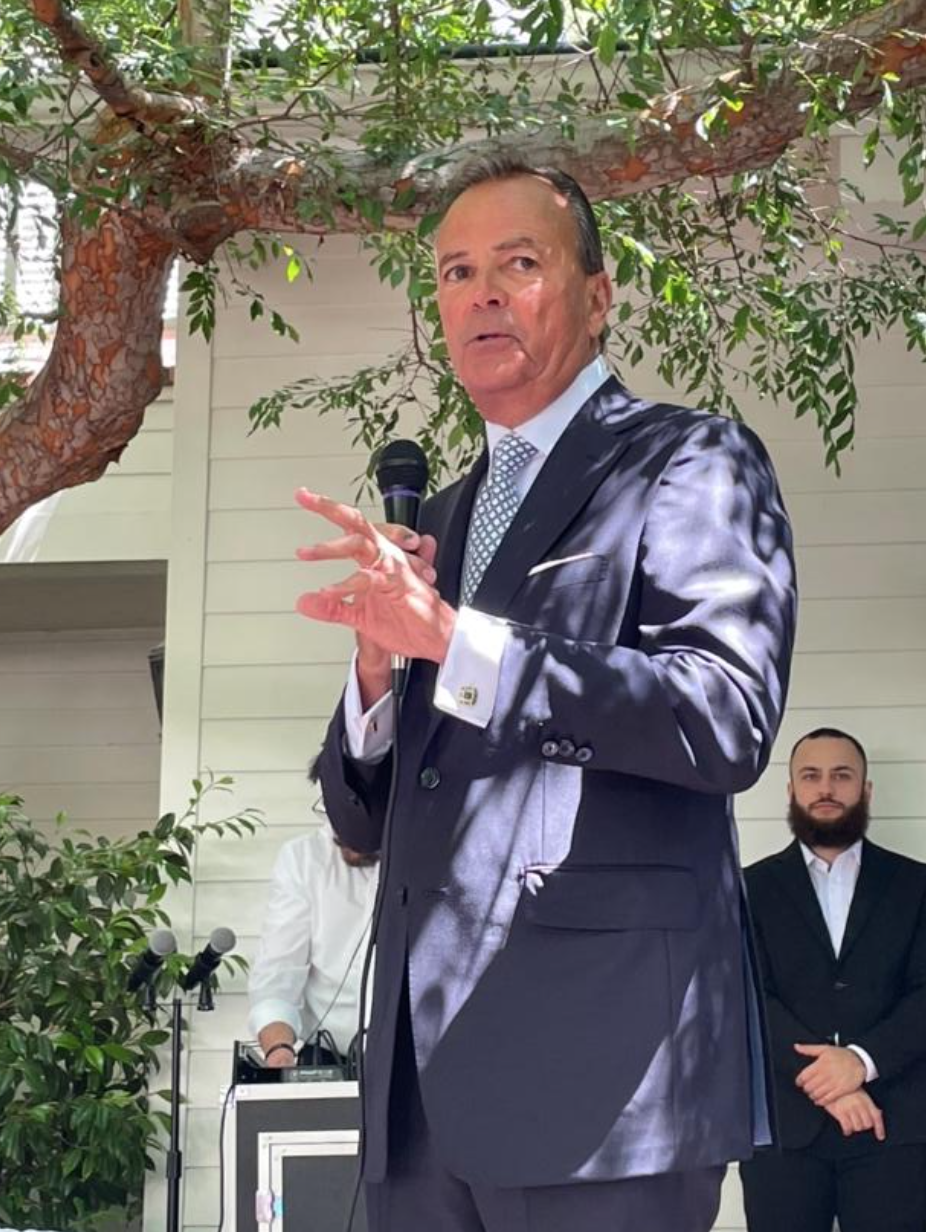 This most recent one for Rick Caruso seemed … different. There was electricity in the air, a genuine enthusiasm for the promise of Rick Caruso – that is, as a successful businessman and non-politician, he will get things done. Over 350 attended, an all-time record for a Tom Safran event (Joe Biden attracted 300 when running for president). Scott Mayers co-hosted the event.

You know how politicians typically have a way of saying things without really saying things? That was not the case with Rick Caruso. Caruso was very direct and plain-spoken about his plans to build affordable shelter and provide mental health services for the homeless and to rebuild the strength of the LAPD. There was no mumbo-jumbo. It all seemed very believable.
Former Chief of Police Bill Bratton was there to help introduce Caruso, who served as head of the Police Commission when Bratton took over as chief. Bratton expressed dismay at how much LA had declined in recent years. Caruso said that, if elected, he would ask Bratton to consult with him in the quest to add 1500 more officers. That drew applause. Caruso and Bratton oversaw a 30 percent reduction in crime, they both said.

Tom Safran, an architect with significant expertise as a developer of low-income housing, expressed admiration for Caruso’s many retail projects in LA. Safran said he was asked once by a reporter from the LA Business Journal what project he didn’t build – but wished he did. Safran cited Caruso’s Americana, a shopping mall in Glendale. Caruso also built The Grove. Safran said some pundits and political opponents seemed to be hinting Caruso doesn’t have enough experience in government to be mayor. But being a developer in LA (and dealing with all the red tape required), serving as president of the Police Commission and serving on the board of DWP provided Caruso with ample experience. According to Safran, few know city government as well as Caruso.

While this topic didn’t come up during the Safran event, I think Caruso deserves huge credit for cleaning up the mess at USC. It’s hard to imagine how that would have happened had USC not tapped Caruso to take over in its hour of need.

There isn’t a lot of talk from Caruso about how hard it’s going to be to bring about needed changes. It’s more like, “Come on, let’s roll up our sleeves and get to work, we are doing this!” After the Safran event concluded, I saw Rick Caruso on the way out. While shaking hands, I told him he and I had met briefly during the 2018 opening weekend of Palisades Village, another Caruso project. I told Caruso I was with the Brentwood News and had posted an article about him at the time. He immediately remembered that I had suggested he should take over the Charlie Munger project, Green Hollow Square.

In addition to his many talents, the man has an excellent memory – and really good taste in local newspapers!