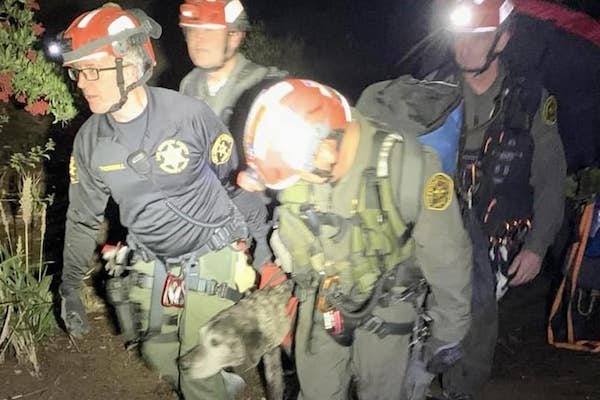 Search and rescue crews safely recovered a dog that had been missing in the Santa Monica Mountains. The dog, named Smokey, had been stuck in a 200-foot-deep canyon for a week before being rescued by the Los Angeles Sheriff Department Malibu Search & Rescue Team.

According to Dog Days Search & Rescue – a nonprofit animal search and rescue organization – Smokey went missing on November 5 in the Santa Monica Mountains near Malibu. The organization says it heard about Smokey’s disappearance and reached out to the owner to assist.

“We went out and met with his owner, hung lost flyers, searched the area but did not see him. We were concerned that Smokey was injured and stuck somewhere but the mountain area was so wide open and vast,” Dog Days Search & Rescue wrote in a social media post.

Then on Friday, November 11, workers clearing a property in the mountains noticed a dog stuck 200 feet down a cliffside. Later in the day those same workers saw a “missing” poster for Smokey from Dog Days and realized it was the same dog they saw down in the canyon.

“They were not able to get the dog to safety but they recognized it from our lost flier and reached out to Smokeys owner who then called us. It was dark by now and Smokey was still out there, potentially hurt and had been without food or water for days,” Dog Days said. “We had to go out right away and we immediately knew that this terrain would require additional team and equipment so we reached out to the Los Angeles Sheriff Department Malibu Search & Rescue Team for help. They immediately responded and recognized the urgency and met our team and the owner out in the area of the sighting. They were able to locate and extract Smokey, who had probably been stuck in this spot for a long time.”

Malibu Search & Rescue says it was able to rescue Smokey within two hours of being contacted.

“We responded immediately and within a couple hours of the initial contact, the dog was safely rescued from 200 ft over the side. Weak, but in good spirits, the dog was transferred to its owner,” Malibu Search & Rescue said.

According to Dog Days, Smokey appeared stable but was sore, coughing and his legs were weak and possibly injured so he had to be carried out.

“His owner waited nearby and when he saw Smokey they were both so happy to be reunited,” the Dog Days said “We rushed Smokey over to the vet’s office late last night and stayed with his owner. Smokey was sent home and will be recovering and is awaiting additional test results.”

Dog Days said it will share an update on Smokey’s status when it has more info. This article will be updated as more details are shared.