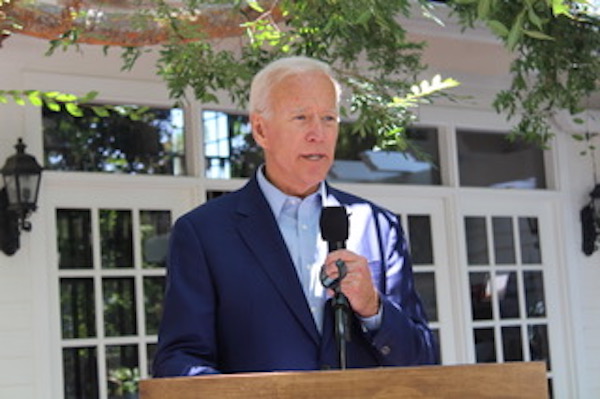 Joe Biden attended a backyard political fundraiser recently in Brentwood, stating 2020 represents “the most important election in our lifetimes.”

The event, attended by over 300, was held in the backyard of Tom Safran.

Arbour said the U.S. faces a “crisis of division” and that Joe Biden represented the best hope for America as the 2020 election approaches.

Biden quickly made clear he isn’t a fan of Donald Trump.

“He is tearing at the fabric of our country,” said Biden, adding: “Our children are listening – and it really matters.  The world is listening, too.”

Biden said four years of Donald Trump were challenging enough, but another four years could prove disastrous.  “People are losing confidence in our ability to lead,” according to Biden.

It’s time to “restore our soul,” said Biden, starting with rebuilding the middle class.  “We need to reward work as well as wealth,” said Biden.

Biden urged the crowd to stick with Obamacare, building on it.  He also called for an additional $15 billion to $45 billion in funding for pre-school and community college education.

In order to fund this spending increase, Biden proposed eliminating “stepped up basis,” a tax law that allows those who inherit property to start over from zero when calculating capital gains.

America is all about “possibilities,” according to Biden.  Our country can change things dramatically, he said, if we choose to work together.  Biden said climate change offers the chance to create a new economy that would generate 10 million jobs.

The U.S. needs to invest in new technologies, he said, citing DARPA (Defense Advanced Research Projects Agency), which gave us the Internet, among other things.

He said if we aren’t careful, China will “own” 5G and AI (artificial intelligence).

Biden finished by saying he was “more optimistic than ever” about the future of America.

“Let’s remember who we are,” he said.  “We are America. We can do anything we set our minds to.”

Tom Safran has, for many years now, opened up his backyard to fundraisers for candidates from all parties.  Often candidates who oppose each other are invited to host fundraisers.