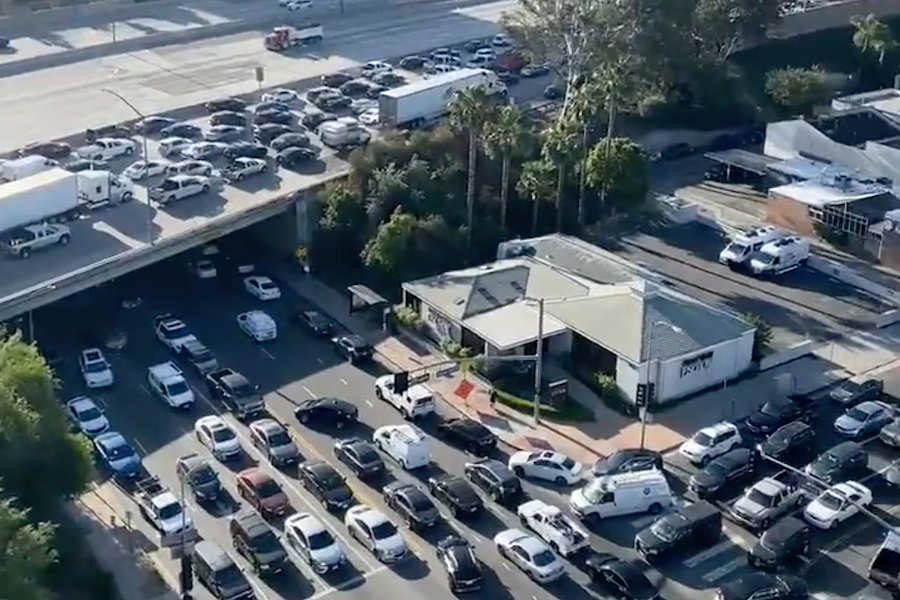 A man started firing at California Highway Patrol officers Thursday morning on the 405 Freeway near Brentwood, forcing them to return fire, shutting down the freeway for several hours.

According to the CHP, the incident took place around 3:15 a.m. on the 405 freeway near Skirball Center Drive

“A red Mustang was on the shoulder of the freeway. Officers noticed an airbag was deployed,” said CHP Officer Jose Barrios during a Thursday afternoon press conference. “They observed a male outside the car. At that point, the male reached into the car, pulled out a pistol, and started shooting at officers.”

“The officers did not know this person would pull out a gun until the suspect started firing,” added Barrios.

CHP Officers returned fire, striking the suspect, who was transported to UCLA medical hospital. His condition was unknown at the time of press.
No officers were injured in the incident although a patrol car had bullet holes in it.

The incident shut down the 405 Freeway for several hours in both directions. Some drivers were stuck in traffic for hours, unable to find other routes.
Two lanes of the southbound 405 were reopened around 9 a.m. The remaining lanes reopened around 1 p.m.

Officer Barrios said at the press conference that it was unclear how the Mustang was originally damaged and that it was also unclear if the suspect owned the car. The vehicle was not believed to have been stolen.

There is also no indication of why the suspect opened fire at the officers at the time of press.